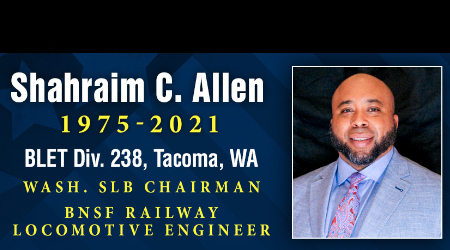 The Brotherhood of Locomotive Engineers and Trainmen (BLET) this week announced the unexpected death of Washington State Legislative Board Chairman Shahraim Allen, who died June 24. He was 45.

Allen was a third-generation railroader who belonged to BLET Division 238 in Tacoma, Washington. In 1994, he was hired as a switchman for the Burlington Northern, earning a promotion to locomotive engineer on Dec. 20, 1995, BLET officials said in a press release.

Allen, who joined the BLET in 2001, was elected three times to serve the BLET as chairman of the Washington State Legislative Board. He was first elected in 2012 and subsequently reelectedin 2016 and 2020.

During Allen's tenure as chairman, the board secured important legislative improvements to better the lives and safety of railroad workers, BLET officials said. Allen led the Washington State Legislative Board as it lobbied for passage of a bill that mandated a minimum crew size in a locomotive cab. Gov. Jay Inslee signed that bill on March 27, 2020.