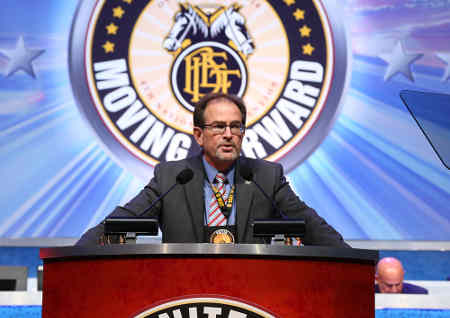 The Brotherhood of Locomotive Engineers and Trainmen (BLET) yesterday re-elected Dennis Pierce to his third full term as the union's national president.

Additionally, the union elected all Advisory Board members without opposition. Their terms will begin Jan. 1, 2019, BLET officials said in a press release.

The votes were taken at the BLET's Fourth National Convention in Las Vegas.

Also at the convention, delegates adopted two resolutions. The first cited the Coordinated Bargaining Group's success in the most recent round of national contract negotiations and supported coalition bargaining in national negotiations.

The second emphasized the BLET's support of Amtrak's national network, noting that the number of passengers has continued to grow over the years "in spite of attempts to kill the service," BLET officials said.

"The current Amtrak management is in the process of closing dozens of small-town train stations, downgrading service and amenities aboard many trains, while threatening to eliminate other trains completely," the resolution stated.