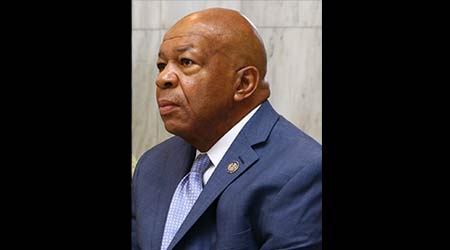 Transportation industry and government leaders were among those offering statements and condolences on the passing of U.S. Rep. Elijah Cummings (D-Md.), who died early yesterday due to complications of longstanding health challenges. He was 68.

"I am deeply saddened by the loss of my longtime friend and colleague," said House T&I Chairman Peter DeFazio (D-Ore.) in a press release. "His strength and grace in leadership during challenging and difficult times will be greatly missed. He was a tireless advocate for his constituents and a champion of democracy and justice for the American people. Congress, and our country, are better because of him.”

"He was relentless in his support of Baltimore and for civil rights across the nation," Baker said. "For short lines and the ASLRRA, we were blessed to have him in our corner — he understood the importance of infrastructure investment and rail service to companies in Baltimore, and the importance of the jobs railroads support."

U.S. Rep. Dan Lipinski (D-Ill.), who chairs the railroads subcommittee, said of Cummings: "He was a thoughtful and committed representative for his district and strong voice in Congress whom many looked up to. We have lost a great American leader."