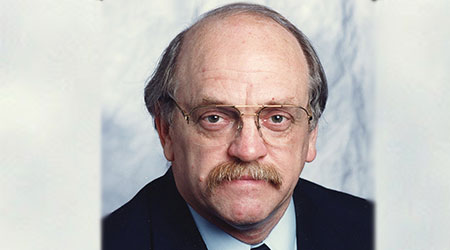 Hucker began his rail career in 1966 as a yardman for Canadian Pacific in Fort William, Ontario. He was promoted to engineer in 1975 and joined BLE Division 243, where he served as local chairman from 1980 to 1986.

In 1986, Hucker was named general chairman of the CP-Prairie & Pacific Regions Regions General Committee of Adjustment. He was elected to the BLE Advisory Board in 1991, and was re-elected in 1996 and 2001.

Following the merger between the BLE and International Brotherhood of Teamsters (IBT) in 2004 and the formation of the Teamsters Canada Rail Conference (TCRC) as part of Teamsters Canada, Hucker was named the first TCRC vice president and legislative director.

He wrapped up his career at the inaugural TCRC convention in 2006 and retired at that time.

"George made many, many friends and was not afraid to be confrontational if that is what it took to get the job done for the members," said TCRC President Douglas Finnson in a press release.

Hucker was known for his "unique slang and epic stories," Finnson added.

"There will never be another George Hucker, and collectively we wish to commemorate his contribution to so many union members lives, and together mourn his passing," he said.

Hucker was a driving force behind the Canadian Alertness Assurance Project (CANALERT ’95), a scientific study to combat and reduce on-the-job fatigue among rail workers. The program identified a number of fatigue countermeasures as an alternative to the traditional regulatory approach to rail safety.