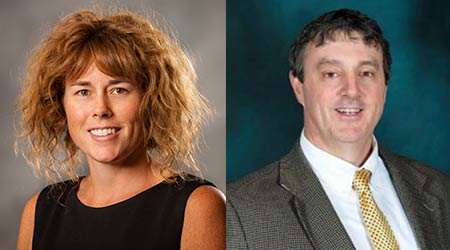 CSX yesterday announced Vice President of Mechanical Brian Barr will assume the new role of senior VP of engineering and mechanical. He will continue to be responsible for the mechanical department while now leading the engineering team.

VP of Engineering Ricky Johnson will remain in that role and report to Barr, who will report to Executive VP of Operations Ed Harris. 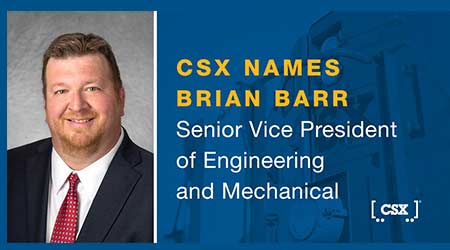 Barr assumes a new role for the Class I.
Image: CSX

Meanwhile, the Belt Railway Co. of Chicago (BRC) late last week announced Pat O’Brien will retire as its longtime president this summer and be succeeded by Mike Grace.

O’Brien has served the railroad for 32 years, including the past 16 as president. His previous roles at the BRC included vice president, controller and treasurer.

O’Brien has had “a tremendous impact” in leading BRC over the years and has made innumerable contributions to the railroad, said Rob Reilly, BRC’s chairman and vice president-South Region for BNSF Railway Co., in a press release.

Grace most recently was division superintendent for Norfolk Southern Railway’s Dearborn Division. He has 38 years of railroading experience, including various leadership roles in rail operations.

Watco Cos. LLC announced a succession for a key executive, too. The company last week named Laura McNichol SVP of government and industry relations to succeed Ed McKechnie, who became a partner at Chamber, Conlon and Hartwell LLC. He will continue to provide consulting services to Watco.

McNichol joined Watco in early 2017 as VP of government and industry relations. She now will lead the company’s public policy efforts on such matters as the short-line tax credit and truck-size-and-weight limits.

McNichol previously was assistant VP of external relations for R. J. Corman Railroad Group, and AVP of industry relations at both GoRail and the Coalition Against Bigger Trucks.