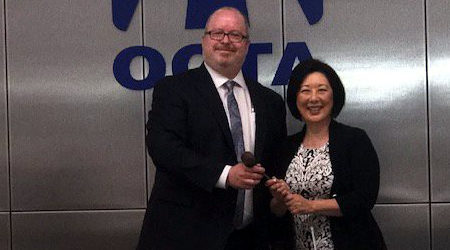 Lisa Bartlett has been elected chair of the Orange County Transportation Authority (OCTA).

She served as OCTA's vice chair for the past year. Bartlett replaces outgoing chair Michael Hennessey, who remains on the board.

Bartlett is the Fifth District supervisor for Orange County, and she also serves on the Transportation Corridor Agencies' board. She joined OCTA's board in December 2014, agency officials said in a press release.

The board elected Tim Shaw to serve as vice chair. He serves as mayor of La Habra, California, and has represented Orange County's Fourth District on the OCTA board since 2012.

The OCTA is one of five agencies that governs Metrolink commuter-rail service in Southern California. The OCTA also is planning a new 4.1-mile streetcar route between Santa Ana and Garden Grove, California.

Gillian Gillett, who represents the City and County of San Francisco Board of Supervisors, was elected vice chair of the JPB.

The JPB is the governing body of Caltrain, which provides commuter-rail service in San Francisco, San Mateo and Santa Clara counties.