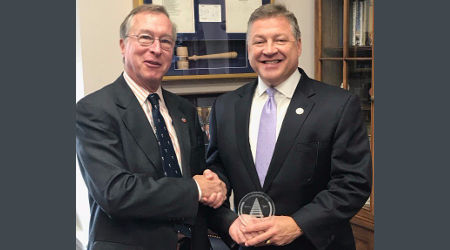 The Association of American Railroads (AAR) and GoRail yesterday honored House Transportation and Infrastructure Committee Chairman Bill Shuster (R-Pa.) with the Railroad Achievement Award for his leadership on rail issues.

Shuster was recognized for understanding the critical importance of safe and efficient rail operations across the nation's 140,000-mile rail network, AAR officials said in a press release.

"In his time as leader of the T&I Committee, Chairman Shuster has helped steer several important pieces of legislation, including the Fixing America's Surface Transportation (FAST) Act in 2015, which included key rail provisions like Amtrak reauthorization," said AAR President and Chief Executive Officer Edward Hamberger. "We are proud of our working relationship with Chairman Shuster knowing he understands the need for both freight and passenger rail in Pennsylvania and beyond, as well as the great lengths railroads go to invest in their private networks, and we look forward to continued discourse with the Chairman."

Hamberger also praised Shuster for his role in reauthorizing the U.S. Surface Transportation Board in 2015, which AAR officials view as "an essential step in ensuring balanced economic regulation" for the freight-rail industry.

"Communities and companies all across America benefit from an innovative freight-rail industry that invests more than 40 cents of every revenue dollar back into the nation's rail network," said GoRail President Russell McGurk. "Making this possible are sound public policies and elected leaders like Chairman Shuster with the foresight to enact and protect those policies."

The Railroad Achievement Award is given periodically to members of Congress who have shown leadership on policies that help ensure the vitality of railroads in the United States. The AAR and GoRail earlier this year presented the award to U.S. Sens. John Thune (R-S.D.) and Bill Nelson (D-Fla.), and U.S. Rep. Peter DeFazio (D-Ore.). The two organizations plan to bestow the award to several other lawmakers in 2018.