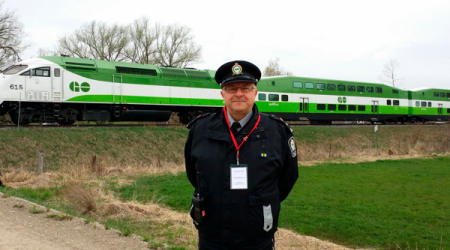 Mohyla has served Metrolinx as a transit safety officer for 30 years. During his career, he has helped promote safety along Metrolinx's corridors in the greater Toronto and Hamilton area (GTHA), coordinated school presentations and community events, worked with police and other public safety agencies, and helped find innovative ways to educate the public, including through social media, Operation Lifesaver Canada officials said in a press release.

"Peter is an energetic and passionate champion of rail safety in the GTHA and beyond," said Bill Grodzinski, Metrolinx's director of security, who nominated Mohyla for the award. "He collaborates extensively with colleagues and external partners, and takes the safety of community members who drive or walk near Metrolinx’s rail corridors very seriously.”

"Peter is a model of rail safety leadership in Canada. We're very lucky to have him on our team," said Operation Lifesaver Canada National Director Sarah Mayes.

Launched in 1981, the Roger Cyr Award is a joint initiative between Operation Lifesaver Canada, Transport Canada and the Railway Association of Canada.