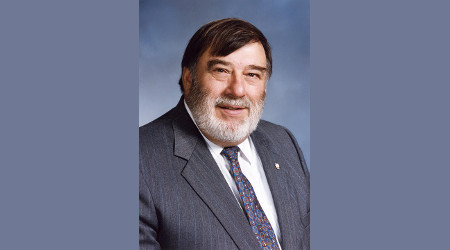 Jim Shell, former international vice president of the Brotherhood of Locomotive Engineers (BLE), died June 1 at a hospital in Kansas City, Mo., the union announced yesterday. He was 83 years old.

Shell began his railroad career in 1954 as a switchman on the Chicago, Burlington & Quincy Railroad (CB&Q) in St. Joseph, Mo. In 1955, he left his railroad job to serve the U.S. Navy on the U.S.S. Bennington for two years.

After completing his military service, Shell returned to the CB&Q, where we was promoted to locomotive engineer in January 1964.

In 1968, Shell joined the BLE as a member of Division 107 in St. Joseph. He served as local chairman from 1969 to 1982, when he was elected alternate vice chairman of the Burlington Northern General Committee of Adjustment. He held that office for four years before being elected general chairman in 1986.

In 1987, Shell became international vice president following retirements on the Advisory Board; he was re-elected to the post in 1991 and retired in 1996.