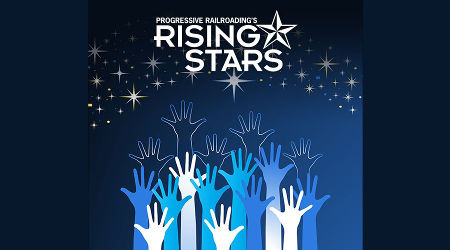 Today, Progressive Railroading announces the 20 people chosen for recognition as the 2017 "Rising Stars" of the North American railroad industry.

This is the fifth year that Progressive Railroading has sponsored the Rising Stars Awards program. The magazine defines a Rising Star as someone under the age of 40 who has made, or is making, a positive impact on his or her company, organization, department or team, and is viewed by others — peers, colleagues, supervisors, clients or associates — as an up-and-coming leader in the rail industry.

This year's 20 honorees were chosen based on their contributions to the railroad industry, career achievements, demonstrated leadership, professional association activity or community involvement. Their stories will be profiled on ProgressiveRailroading.com this summer and published in the magazine's September issue.

In addition, the 2017 Rising Stars will be recognized at a dinner to be held July 23 at the Chase Park Plaza Hotel in St. Louis during the American Association of Railroad Superintendents' 2017 Annual Meeting.

The Rising Stars for 2017 and the organizations they work for are: