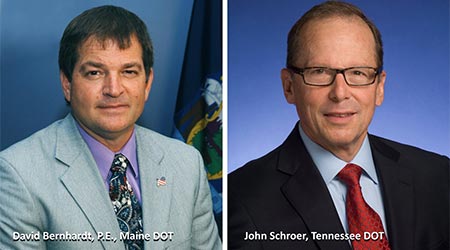 As president, Bernhardt said he would concentrate on working with Donald Trump's administration and Congress to develop strong transportation legislation, address freight and freight connectivity, and implement AASHTO committee restructuring.

In November 2014, AASHTO adopted a new strategic plan that called for a review of the committee structure and operations. Bernhardt will help lead the implementation of approved changes.

"AASHTO has helped to shape America's transportation priorities for more than 100 years," said Bernhardt in a press release. "My priority will be to continue this great work as president because, when you think about it, transportation is a bipartisan issue."

Schroer was appointed Tennessee's transportation commissioner in January 2011. In addition to serving as AASHTO's new vice president, he chairs the association's Standing Committee on Finance and Administration.