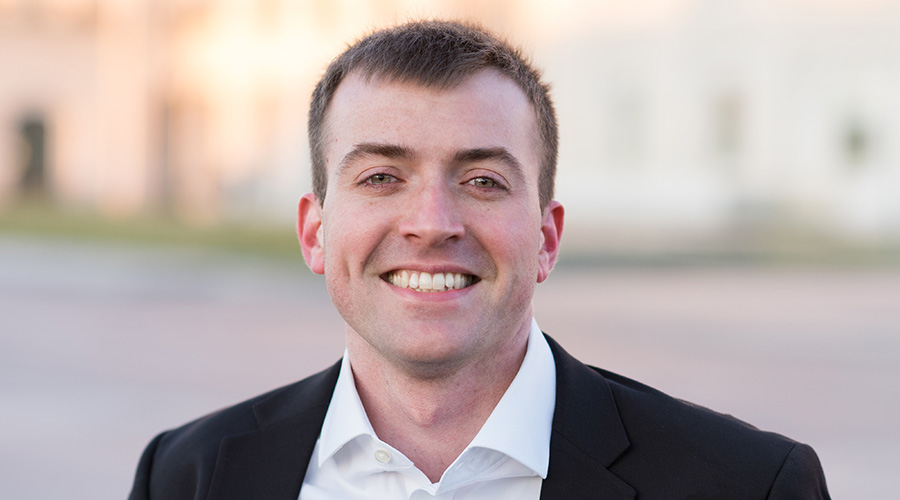 Nominator's quote: "Sean has a passion for the rail industry and has made significant strides in his young career. He built the REMSA grassroots program from the ground up and now in his current position he lobbies on behalf of passenger and freight railroads in Washington, D.C. In particular, Sean has infused his energy and passion into working closely with passenger-rail agency leaders in California to help reform the state- supported routes for the growing rail systems out West." — Matt Ginsberg, Tai Ginsberg & Associates

Job responsibilities: Assists clients with water, railroad and general infrastructure issues before the federal government. Serves as the primary client manager of the San Joaquin Regional Rail Commission and the San Joaquin Joint Power Authority, which jointly manage the ACE commuter-rail service and the Amtrak state-supported route the San Joaquins. Also works with county and municipal governments, Class Is and other commuter-rail agencies.

Career path: After graduation, joined then-Maryland Delegate Jon Cardin's campaign for attorney general. Worked on fundraising for about a year, then was moved to Cardin's Annapolis office to work on legislation during the Maryland General Assembly session.

Next, took an entry-level lobbying job in Washington. Soon after, stumbled upon an opportunity with the Railway Engineering-Maintenance Suppliers Association (REMSA) to build out its grassroots advocacy and membership engagement program. After a brief hiatus from the industry, accepted a position at Tai Ginsberg & Associates.

How did you get into the railroad industry? Mostly luck. I applied to be the grassroots coordinator at REMSA and was fortunate enough to be hired. However, rail and transit has always played an important part in my life. My grandfather worked on high-speed trains in Japan as an engineer and I relied on Metra commuter trains in Chicago to get to high school.

What is the best career advice you've received? It has not been advice per se as much as individuals and organizations willing to take a chance on me. I am extremely grateful to every person who has taken an interest in my life, family and career. I owe much of the success in my career to my colleagues, mentors and peers.

What advice would you give to a new railroader? Dive into the industry and build relationships. The rail industry enjoys a long and storied history, and many railroaders are more than willing to share their passion and knowledge with those that are curious and open-minded. Attending industry events, putting yourself out there and not being shy will help any new railroader hit the ground running and thrive.

What was your very first job? Making sandwiches at Jimmy John's. Stick to the roast beef, avoid the turkey.

Describe a fun fact about yourself. In high school, I played basketball with Michael Jordan's son Marcus. We were in the same grade and tried out for the freshmen basketball team together. While I was gutting it out to make the freshmen team, Marcus was promoted to the Varsity squad by the next scrimmage.

Michael Jordan ended up buying the shoes for all the teams — Jordans of course. However, they did not purchase any in my size (15) and I unfortunately missed out on a pair of Jordans directly from his Airness.

What do you enjoy doing in your spare time? I love to entertain and cook. Since joining the rail industry, I have picked up some knowledge on wine, whiskeys and bartending. This has led me to really enjoy having friends, clients and colleagues over for dinner and showing off in the kitchen and behind the bar.

What is the rail industry's biggest challenge? It remains passenger rail. You cannot participate in a Railroad Day on Capitol Hill without hearing how America has the best freight railroad network in the world, and this is true. However, despite numerous possible regional rail corridors with the populations to support it, we lack reliable intercity rail outside of the Northeast Corridor.

Policymakers, host railroads and Amtrak all need to reevaluate how the railroad network and market has evolved since Amtrak's creation in 1970. Clearly, a federally backed, quasi-monopoly operator model has failed to produce the passenger railroad network the country deserves. Clearly, the continued public focus on high-speed rail and maglev technologies causes us to overlook the established and reliable railroad network we already have.

I think all stakeholders must reevaluate our current system, create competition, target investments and allow states and local governments the same network access rights that Amtrak enjoys, with Surface Transportation Board oversight.