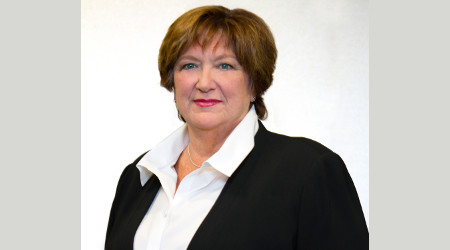 As president of Transportation Technology Center Inc. (TTCI), she's at the forefront of the latest rail industry research. She also focuses on fostering a positive work-life balance for her employees.

"If we want to retain the best and brightest — both young men and young women — we need to make sure they know we value their family, as well," says Stabler, who last month received the League of Railway Industry Women's (LRIW) 2017 Outstanding Woman of the Year award. "We'll figure out how to make this work for everyone while we still get the job done."

Stabler accepted the award — which is sponsored by Progressive Railroading — at Railway Interchange 2017, held Sept. 17-20 in Indianapolis. Each year, the honor is given to a woman whose innovation and problem-solving skills have made a positive impact on the rail industry.

Located in Pueblo, Colorado, TTCI develops and tests new technologies to improve safety, reliability and efficiency of the rail industry. The center features a 52-square-mile facility with 48 miles of test tracks.

At TTCI, Stabler aims to provide flexible working hours for her staff, along with the ability to work from home to address special circumstances, such as tending to a sick child. She also does what she can to lead by example: Stabler openly talks about her husband and three children, and takes the time to learn the names of her employees' family members.

But that kind of openness hasn't always been the norm. Back in the 1980s, Stabler found herself in a workplace environment that wasn't supportive of employees raising families.

"Family was considered a deterrent to a career, and a specific reason not to be promoted," she says.

Stabler acknowledges that some TTCI employees face many of the same issues she dealt with — whether that's coordinating children's after-school activities or caring for aging parents. But she says she does what she can to make their burdens lighter.

Promoting a positive work-life balance is also key when it comes to recruiting and retaining young talent, Stabler believes. Providing internships for students is another way she helps bring younger folks on board. 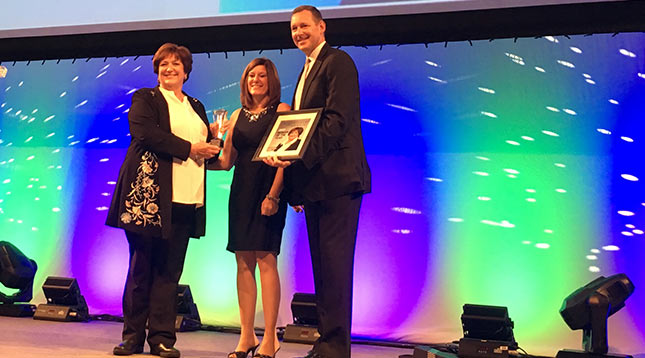 Having worked as a cooperative education student at General Motors Co. in 1980, Stabler sees the value of internships and other similar programs in the rail industry. She ended up working for GM for about two decades.

Stabler made the switch to railroading in 1999, when she left GM to become vice president of mechanical for BNSF Railway Co. A former boss from GM called her and told her about opportunities in rail.

While she worked at the Class I, Stabler helped improve BNSF's safety and velocity by reducing roller-bearing derailments, according to Byron Dickey, vice president of strategic development at Amsted Rail. Dickey reported to Stabler at BNSF before he joined Amsted.

"Lisa's tenure at BNSF brought world-class maintenance, reliability engineering and Six Sigma problem solving to a relatively staid leadership environment," Dickey wrote in his nomination for Stabler as Woman of the Year. "The gains at BNSF are well known throughout the industry, but few know how important Lisa's contribution was to those gains."

In 2010, Stabler joined TTCI as vice president of operations and training. She was named president in October 2011.

"I never envisioned [working in] the rail industry, in all honesty," Stabler says. "Many people outside of our industry view us as an old industry that does not innovate. But the thing I saw is that railroading is an industry that really embraces innovation."

And that's a message Stabler hopes to share with the general public, too. In July, she appeared on NBC's "Today" show to discuss TTCI's rail safety research efforts, including tests of new technology to check for broken wheels as trains pass over tracks.

"I was really proud to be able to show our site and show the great things our organization is doing," Stabler says of her experience on the "Today" show. "We all believe strongly in the need to tell our story, and that means we may need to communicate in ways that we haven't before."

Stabler isn't shy about sharing TTCI's work with elected officials, either. She's appeared before congressional committees to share details about various advancements in rail safety, wrote Association of American Railroads (AAR) President and Chief Executive Officer Ed Hamberger in his nomination for Stabler as Woman of the Year. TTCI is a wholly owned subsidiary of the AAR.

"Under Lisa, TTCI has engaged in critical research to better predict maintenance needs and address the leading causes of derailments in addition to the development and testing of positive train control interoperability technologies," Hamberger added.

As far as sources of inspiration in railroading, Stabler looks to BNSF leaders Matt Rose and Carl Ice.

"They're decisive. They've got a clear vision. And they have a great skill in that they let the data drive their decisions," she says.

Above all, Stabler's mother was the person who emphasized the importance of getting an education.

"The one quote that she had that sticks with me to this day is that an education is one thing that no one can ever take away from you," says Stabler, who holds a bachelor's degree in mechanical engineering and a master's degree in mathematics with a concentration in applied statistics.

While Stabler is proud of TTCI's "breakthroughs and research," she also feels a sense of pride in her team.

Ultimately, the center's research is the result of a team effort, she says.

"I've got a great leadership team, and I've got a great organization of 300 individuals who are all very hardworking and dedicated. … Certainly their enthusiasm is infectious."

And Stabler continues working to bring new folks into the fold. Outside of TTCI, she serves as a member of the advisory board for Penn State Altoona's Rail Transportation Engineering program. In that role, she's provided key input on the "practical skills the next generation of railroaders need to prepare them for a successful career in the industry," wrote AAR's Hamberger.

"We've seen a tremendous turnover over the past few years, specifically at TTCI," Stabler adds. "Our organization depends upon attracting new individuals to come to pick up the work that individuals who are retiring have done."