Is Tom Hoback an over-the-top model railroad collector with a lead foot who was spoiled as a child and became a long-suffering Chicago Cubs fan with an addiction to Starbucks coffee? Or, is he a single-minded taskmaster and Type A personality who’s prone to giving “the look” — a piercing stare with steely blue eyes — if an action or remark is deemed incorrect?

All of the above, apparently. Those fun-poking descriptions of Hoback surfaced during a career achievement banquet/roast held June 12 in Indianapolis to mark his nearly 30-year career as the founder, president and chief executive officer of the Indiana Rail Road Co. (INRD).

Despite a lot of teasing, the event that drew more than 160 people to Indianapolis’ historic Columbia Club was much more of a tribute than a roast. During nearly three hours of presentations, a local politician, a family member and several long-time friends, current and former colleagues, business associates and rail-industry acquaintances spent a lot more time talking up Hoback’s numerous accomplishments, positive traits and contributions. Among them: a dogged determination to establish and grow a short line in an era when railroads were viewed as a dying breed; the tenacity, perseverance and wherewithal to increase INRD’s business more than 12-fold; the patience and persistence to improve the railroad’s infrastructure at a cost exceeding $200 million since 1986; and an infectious belief in the importance of serving customers’ needs and supporting communities. 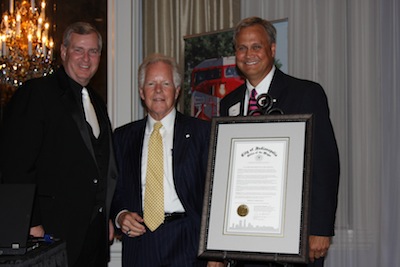 Indianapolis Mayor Greg Ballard recognized many of those attributes before dinner was served. He presented Hoback a framed proclamation declaring June 12 "Thomas G. Hoback Day." The honor cites his efforts to acquire, preserve and completely revitalize a once endangered rail corridor; his decades-long commitment to reinvest earnings to innovate and improve INRD; and his help in advancing civic, educational and artistic institutions in the city.

In addition, Mark Ahearn, general counsel for the office of Indiana Gov. Mike Pence, presented Hoback a "Sagamore of the Wabash" plaque on behalf of the governor. The Sagamore is the highest civilian honor bestowed upon Indiana citizens and isn’t presented very often. 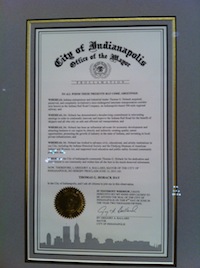 After dinner, INRD Senior VP of Operations and Business Development Bob Babcock had a special gift to present, as well. He unveiled a painting commissioned by INRD employees that depicts the CF7, SD40-2 and SD9043MAC locomotives used over the years as a representation of the railroad's growth and progress.

Babcock reminded the crowd that it was best to avoid the “r” word around Hoback, who refers to his next chapter as “a career change” instead of retirement. He also wanted Hoback to know he’s proud to have served under him at INRD.

Next, Master of Ceremonies Norman Carlson — a Metra board member who became good friends with Hoback many years ago after doing some consulting work for INRD — got the program rolling by describing Tom’s childhood. Hoback grew up near Peoria, Ill., in a home near rail lines and became interested in railroads. He eventually immersed himself in the Atchison, Topeka & Santa Fe Railway, which became his favorite railroad, said Carlson.

“He kept watching trains and learning. But he was very spoiled — he had all the toys and comic books he wanted,” Carlson joked.

Apparently, toys still matter to Hoback. He has 200 locomotives in his model railroad collection and “his wife says he’s looking for more,” said Carlson.

Tom also drives quite fast and has “surprisingly” good mechanical skills, such as the ability to get a hi-rail truck on track by himself, joked his sister Mary Hoback Taylor, who followed Carlson to the podium. She talked about Hoback’s early years at INRD while various photos of him were shown on a large screen.

A long-time customer service coordinator at INRD, Mary heaped more praise than barbs on her brother, calling him a lifelong learner who is kind and generous, and a stickler for serving customers’ interests.

“Tom said to always be honest with customers. Don’t sugarcoat the truth,” she said.

However, Tom chided Mary for not being truthful in depicting him fairly in the photos, many of which showed a Margarita or other drink near his grasp.

“How come every picture of me has alcohol in it?” Hoback teasingly asked.

Perhaps each photo should have shown a Starbucks cup instead. Hoback is addicted to the coffee and sometimes buys four or five cups a day, said Carlson.

“Tom can’t go past one, and he knows the location of each one,” he joked.

But it’s no laughing matter to Carlson or the INRD crowd about the growth Hoback has fostered. The regional’s traffic and revenue on average grew 12 percent, compounded annually, over the past 29 years, said Carlson. In addition, Hoback spent 18 years patiently pursuing the acquisition of a 92-mile line between Fayette and Bedford, Ind., from Canadian Pacific, he said. Finally landed in 2006, the deal included trackage rights over a CSX Transportation line from Chicago to Terre Haute, Ind., and Bedford to Louisville, Ky. The transaction expanded INRD's trackage from 155 miles to more than 500 miles.

John Cummings — a signal and maintenance-of-way manager for the Illinois Central Gulf Railroad who became one of INRD’s 16 original employees — believes the CP deal shows how Hoback had an “idea and vision” about how the railroad could work in the future. Hoback, the last of the original employees, has always considered and supported his workers, Cummings added during his remarks.

“If you run a railroad like a business, you do OK, but Tom ran it like a human being too, which is a big difference,” he said. “There have been no layoffs. Tom found another way in hard times.”

For example, Hoback directed crews to remove track that wasn’t being used, which “kept guys working in winter,” said Cummings.

Indianapolis Power & Light Co. (IPL) Manager of Fuel Supply Harold Leitze — who’s known Hoback for many years while working for large INRD customers — praised his run-it-like-a-business acumen. But Leitze, a former manager of fuels for Hoosier Energy, questioned something he heard from INRD account executives while working at both companies.

“When I worked for Hoosier, I was told we were their No. 1 customer. Now I work for IPL, and I’m told the same thing. I guess that’s what they tell everyone,” Leitze joked during his lively presentation, which included a gag gift for Hoback — a cane with a railroad whistle at the top.

But INRD treats every customer like they’re No. 1 “and that’s why the railroad is so successful,” said Letize. 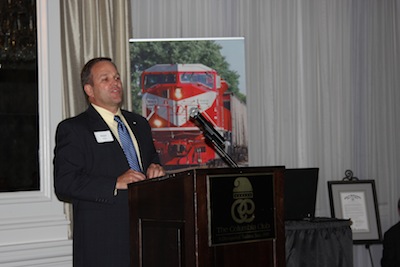 It’s that success that will be hard to live up to, said Pete Mills, who succeeds Hoback as INRD president and CEO on July 1. A CSX veteran for more than 26 years, most recently as VP of finance operations, Mills addressed the leadership change during his brief remarks.

“I am following a legend. The success is a testament to Tom,” he said. “I will do everything I can to be the best steward I can be.”

To cap off the event, Hoback took the podium to a standing ovation. Although he jokingly said he was still was “really aggravated” about the photos, he expressed gratitude to his employees and family for their contributions and support over the years.

“It’s been a remarkable ride. I’m extremely honored and extremely humbled,” said Hoback. “The railroad was more than I expected it to be. We did some pretty incredible things.”

Editor’s note: Hoback did some truly remarkable things for Progressive Railroading, as well. We’d like to thank him for his graciousness and candor in providing valuable insight on a host of short-line topics for more than two decades. He also welcomed us at INRD’s headquarters and at several of the railroad’s events in and around Indianapolis over the years. Best wishes in your “career change,” Tom.