In late June, 21 high school girls convened in Washington, D.C. to participate in WTS International and the U.S. Department of Transportation’s (USDOT) annual D.C. Youth Summit. Participants met with senior federal transportation officials and toured some of the capitol’s transportation facilities. The event is offered as part of Transportation YOU, a mentorship program created by WTS and USDOT that aims to build awareness of transportation-related careers to girls between the ages of 13 and 18. 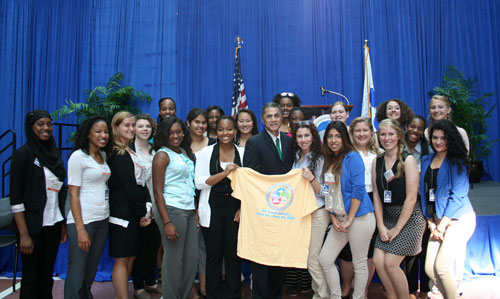 Launched in 2011, Transportation YOU involves connecting women who have successful careers in transportation fields with girls who have an interest in obtaining engineering- or transportation-related degrees. WTS members recruit Transportation YOU participants by using their connections with school districts officials, teachers, Girl Scouts and local Boys and Girls Club chapters.

The end goal? To make young women aware of careers and opportunities available in the transportation industry, and encourage them to tailor their high school and college studies so they can pursue degrees in transportation and engineering fields. To date, about 70 percent of WTS’ 52 chapters have created Transportation YOU programs; participation varies by chapter, with some of the larger chapters boasting 100 Transportation YOU members and others, about a dozen.

“It’s important for these girls to see women succeeding in their careers, so they can look up to them,” says WTS President and Chief Executive Officer Marcia Ferranto.

And it’s important that WTS provide the opportunity. The organization — originally known as the Women’s Transportation Seminar — was created in 1977 as a networking tool for women in transportation fields. And while networking still remains the primary aim, WTS leaders realized they also needed to do more to attract women to the transportation industry and advance them to senior-level positions, says Ferranto.

A year after the Transportation YOU launch, WTS and USDOT added another element to the program at the suggestion of then-U.S. Transportation Secretary Ray LaHood: an annual D.C. summit that would serve as a “boot camp” of sorts for girls who wanted more exposure to and learning experience with transportation issues at a national level, says Ferranto. The first summit was held in 2012.

The five-day event features facility tours (past summits have included a behind-the-scenes look at the Metrorail operations center), discussions with high-ranking USDOT officials and an academic challenge for the participants. The 2014 summit included a tour of USDOT’s Crisis Management Center, a meeting with Deputy Transportation Secretary Victor Mendez, one-on-one meetings with some of USDOT’s female executives and a trip to the Federal Aviation Administration’s Command Center.

This year’s academic challenge focused on connectivity. The girls were divided into groups and dropped off with guides and chaperones in Anacostia, where they toured the area and spoke with residents about access to schools, work and health-care facilities. The groups were charged with developing a presentation that outlined a long-term plan — including options for transit services, walkways, traffic lights and the like — designed to help the community prosper. The challenge was organized by Rutgers University and Portland State University.

“It was really amazing to see how, after just a couple of days in Washington, these girls were able to understand the importance of giving people options for getting around,” says Ferranto.

Individual WTS chapters sponsor mentors and their mentees to attend the summit. Company sponsors are stepping in to help, too. For example, Southwest Airlines provided airline tickets for some of this year’s participants.

“The program is growing in recognition,” says Ferranto.

In the meantime, WTS and USDOT plan to follow program participants through their high school and college years — regardless of whether they follow the transportation route — to determine if Transportation YOU is helping to impact career choices. Because the program still is in its early years, program officers are mainly gathering information for the database.

“We have very little data at this point, but we’ll continue to collect it and will use it to determine the best course for Transportation You,” says Ferranto.