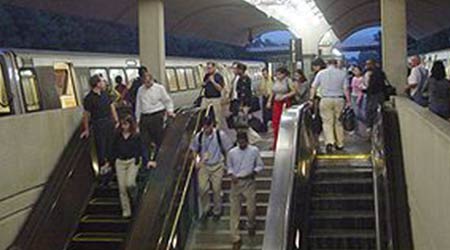 The new stairway is needed to ease platform congestion when trains arrive at Shady Grove Station, primarily during the evening rush hour, WMATA officials said in a press release. The stairs will improve platform egress by creating an additional way for customers to exit the station. Currently, all riders arriving at the station by train take several minutes to make their way to a single descending escalator or use an adjacent existing staircase to clear the platform.

The stairway will be the first capital project to increase capacity at Shady Grove Station since it opened in Rockville, Maryland, in 1985, WMATA officials said. Work is expected to begin next year.

“The addition of a new stairway at Shady Grove will undoubtedly be welcome news for the more than 11,000 customers who use the station each weekday, shaving a few minutes off of their daily commute by reducing the time it takes to exit the system," said WMATA General Manager and Chief Executive Officer Paul Wiedefeld.

Shady Grove is Montgomery County's second-busiest station, averaging 11,517 weekday boardings. The station’s ridership has increased nearly 30 percent over the past 20 years because of residential and commercial developments that have been added in the surrounding area.