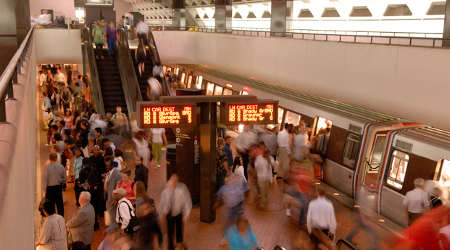 That same month, WMATA also announced the availability of wireless voice and data service in a Red Line tunnel segment.

The Wi-Fi service supplements existing cellular service, which is currently available at all rail stations.

By mid-2018, the agency expects all underground stations to have Wi-Fi service, WMATA officials said in a press release. In addition, work is underway to provide full cell service in all tunnel segments.

Meanwhile, WMATA announced evening and weekend service changes on the Red Line to allow crews to continue a leak-mitigation project.

Beginning Friday, trains will be single-tracked along certain segments as workers install a new waterproof membrane in line's tunnel walls. The service adjustments will continue through Feb. 15.

The new material is aimed at mitigating leaks that could cause arcing insulator incidents.

In September, WMATA unveiled plans to expand the pilot project along the Red Line. The agency in summer began testing the material on a 2,000-foot section of inbound track on the line.