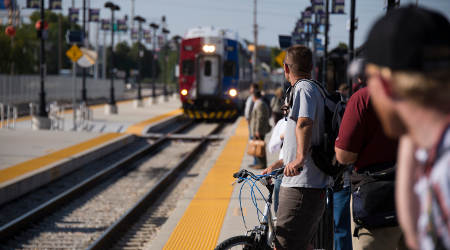 Ridership on the Utah Transit Authority's (UTA) FrontRunner commuter-rail system in September reached an all-time high of 21,800 boardings each weekday.

The figure bested the previous record set in September 2017, when the agency logged 19,155 boardings each weekday.

"September is typically a high-ridership month for UTA, as students return to school and riders use public transit to access heavily attended events," including college football games and the Utah State Fair, UTA officials said in a press release.

This year's ridership also was affected by the opening of the UVX bus rapid transit line and a new partnership with Brigham Young University and Utah Valley University. The UVX line, which opened in August, provides service to Provo and Orem FrontRunner stations, college campuses, local businesses and medical centers.

The partnership with Brigham Young and Utah Valley, meanwhile, enables students, university employees and their dependents to ride UTA trains and fixed-route buses for free with a university ID.

UTA aims to have in place all required elements of PTC on its FrontRunner system by the federally mandated deadline of Dec. 31, according to the agency's website.