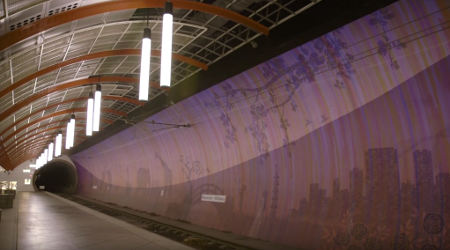 The station now features graffiti-resistant wall coatings, LED lighting and elevator lobby upgrades. The new LEDs, which are engineered to last up to 20 years, use one-sixth of the electricity as metal halide bulbs, TriMet officials said in a press release.

The agency also used granite and ceramic tile to help cut maintenance time and costs while extending the life of the station. The renovations marked the first physical upgrades to the Washington Park Station since it opened in 1998, according to the agency.

TriMet's Blue and Red MAX light-rail lines serve the station, which accommodates more than 750,000 trips each year. Located in Portland's West Hills, the Washington Park Station serves as a gateway to several local attractions, including the Oregon Zoo and the International Rose Test Garden.

TriMet began renovations in April. The work was part of the agency's "Making Transit Better" initiative, which includes upgrades to MAX tracks, switches and equipment to improve reliability and on-time performance.