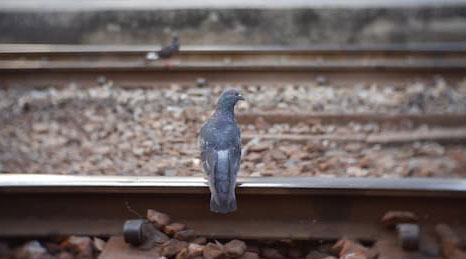 TransLink is working with the British Columbia Society for the Prevention of Cruelty to Animals (BC SPCA) to reduce the pigeon population at SkyTrain’s VCC-Clark Station in Vancouver.

Due to their large numbers at the station, the pigeons at times trigger track intrusion alarms, causing SkyTrain's driverless trains to brake automatically — hard stops that can cause riders to fall and delay service, TransLink officials said in a press release.

An automatic bird feeder now is dispensing a nontoxic birth control pellet to the pigeons to better control their population. Studies have shown the pellet helps reduce their numbers by 50 percent to 90 percent, TransLink officials said. The pellet pilot might be expanded to other stations if it proves successful.

To control other bird populations in its system, the agency also has installed netting at stations to prevent nesting in voids; set up spikes and strips to deter pigeons from roosting on flat surfaces; and employed falconers to patrol stations with the most pigeons as part of a different pilot project.

The TransLink and BC SPCA pilot is supported by several local animal groups, including the Vancouver Humane Society.

"We hope that other businesses can learn from this work and that more considerations are made for the non-human animals that live in our communities," said Michael Austin, the society's executive director.