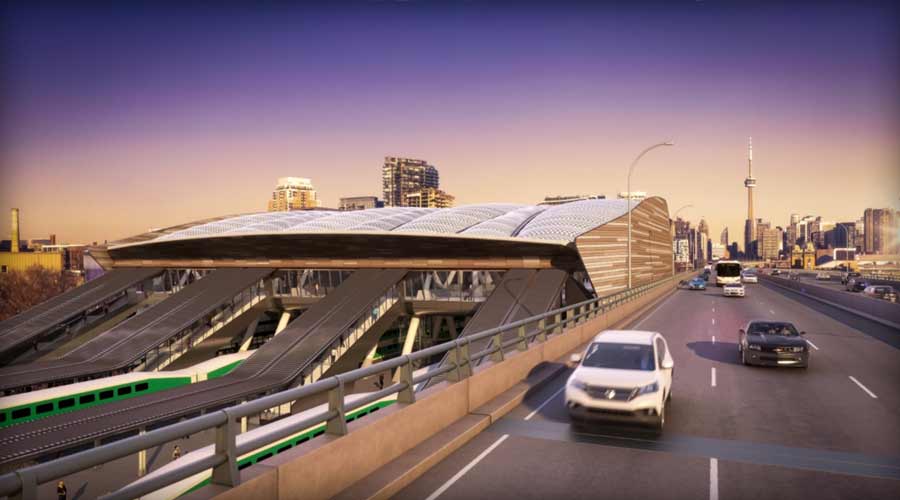 Work is officially underway on a major Exhibition Station transformation in Toronto, marking the start of the multi-billion-dollar Ontario Line subway project.

Exhibition Station will be enclosed so GO Transit and Ontario Line services are under one roof. The work also calls for creating a temporary pedestrian bridge over existing GO Transit line so riders have safe access to trains between Liberty Village and Exhibition Place.

The 10-mile, 15-stop Ontario Line will run from Exhibition Place through downtown to the Ontario Science Centre in Toronto. Station upgrades will be completed before major construction on the line begins next year involving a new station, tracks and platforms to accommodate both Ontario Line and GO Transit services.

"This project will be a game changer for the city and region, and is a key part of our plan to build the roads, bridges, highways and transit needed to move our economy forward," said Ontario Premier Doug Ford in a press release.

The Ontario Line subway will help address overcrowding on the Line 1 subway and at Union Station, and relieve other busy transit lines in the city from regional trains to existing subways to new rail lines, Metrolinx officials said. Coupled with another connection to GO Transit’s system at East Harbour, the Ontario Line could reduce crowding at Union Station by as much as 14% during the busiest travel hour, they added.

The Ontario Line will connect to more than 40 other transit routes, including GO Transit lines, TTC subway and streetcar lines, and the Eglinton Crosstown light-rail line.

"These kinds of connections are going to help us speed up travel times and reduce congestion at key pinch points like Union Station. Breaking ground on these improvements puts us an important step closer to giving the people of Toronto the transit relief they need,” said Metrolinx President and CEO Phil Verster.