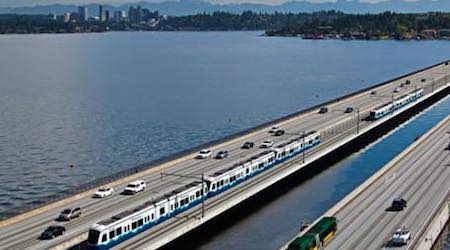 Popular Science magazine has recognized Sound Transit's technology for operating light-rail trains across a floating bridge as one of the most important engineering innovations of 2017.

As part of its 14-mile East Link extension, the agency plans to build light rail on the Homer M. Hadley vehicular bridge over Lake Washington near Seattle

Led and managed by WSP USA, a multidisciplinary team developed a concept for a track bridge that will enable light-rail trains to safely transition from the fixed section of the bridge to the floating section.

Trains will travel on a 1.1-mile floating span linked via transition spans to concrete box girder approach spans on either end, WSP officials said in a press release.

The structure is believed to be the first light-rail line in the world to operate on a floating bridge.

Due to changing lake elevations and weather conditions, the system is subject to dynamic movement of the bridge deck at the existing expansion joints.

The multidisciplinary team included Transportation Technology Center Inc. and the University of Washington.