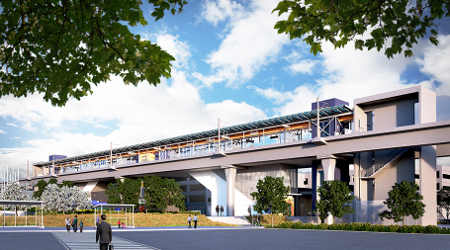 Under the FFGA, the FTA commits to provide up to 36 percent of the project's total estimated cost subject to the annual congressional appropriation. In return, Sound Transit commits to completing the project on time, within budget and in compliance with all applicable federal requirements.

The execution of the grant allows Sound Transit to initially draw $200 million in past appropriations toward the $1.17 billion. In advance of the FFGA, Congress approved $100 million in a fiscal-year 2018 capital investment grant and $100 million in FY2017 funding for the extension.

The 8.5-mile extension will run from Northgate to the Lynnwood Transit and serve four stations. Demolition and utility relocation work is scheduled to begin early next year, followed by major construction activities starting in spring 2019. Service is scheduled to launch in July 2024.

"This is great news for everyone in the Puget Sound region who wants to see more commuting options and our freeway congestion eased," said Sound Transit Chairman Dave Somers in a press release. "Lynnwood Link is the first major investment in light rail for Snohomish County, and we appreciate the hard work of our congressional delegation and the Federal Transit Administration."

Meanwhile, Sound Transit also announced it's nearing completion of the first section of rail for the East Link light-rail extension. A mile-and-a-third-long segment from 80th Avenue Southeast to near East Mercer Way will be the first finished segment, agency officials said.

In the coming year, crews will install rail on the Homer M. Hadley floating bridge. East Link will extend 14 miles from downtown Seattle to downtown Bellevue and include 10 stations. Construction is more than 40 percent complete and the entire line will be operational in 2023, agency officials said.

Sound Transit is working to extend light rail north, south, east and west, and plans to open new stations every few years to form a 116-mile regional system by 2041.