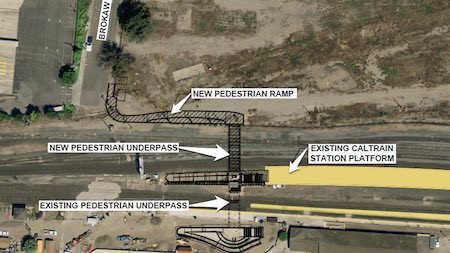 The Santa Clara Valley Transportation Authority (VTA) next week will begin construction on a bike and pedestrian tunnel to the Caltrain station in Santa Clara, Calif.

Transportation leaders and elected officials will gather Nov. 2 for the groundbreaking ceremony, VTA officials said in a press release.

The project calls for extending the station tunnel about 80 feet. The longer tunnel will run beneath the adjacent Union Pacific Railroad tracks. Crews will build a 250-foot open-air ramp to connect Brokaw Road to the tunnel structure.

"People are much more likely to use Caltrain and the other rail systems if they have a safe and easy way to get to the platform," said Ken Yeager, who serves on the Santa Clara County Board of Supervisors. "The Santa Clara under crossing improvements are another example of how VTA is leading the way toward faster, more efficient, and more accessible mass transit."

The existing tunnel on the south side of the tracks will remain open during construction. The new walkway will open to the public in summer 2017.