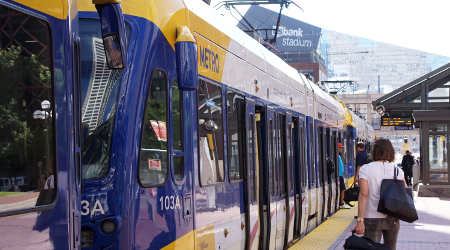 The Metropolitan Council has reported $8.4 billion in developments along existing and planned light-rail transit lines in the Minneapolis-St. Paul area.

The council tracks developments proposed, under construction or completed along Metro Transit's Green and Blue lines. The council also keeps tabs on projects being developed along the lines' extensions.

The Met Council logged the $8.4 billion figure as of Jan. 31, 2017. The number is $1.6 billion higher than it was a year before that date, council officials said in a press release.

"Businesses and developers choose proximity to light rail because they know that residents and workers of all ages are increasingly demanding access to transit — whether for housing, work, school or entertainment," said Met Council Chair Alene Tchourumoff."

Timberland Partners, one of the developers, is adding nearly 600 housing units adjacent to the Green Line and its extension. The Met Council has tallied $5.8 billion in developments along the Green Line alone, up from $5.1 billion in January 2017.

The Green Line has surpassed ridership expectations more than a decade ahead of schedule, as reported in Progressive Railroading's February issue. The line's Southwest extension is slated to begin service in 2023.