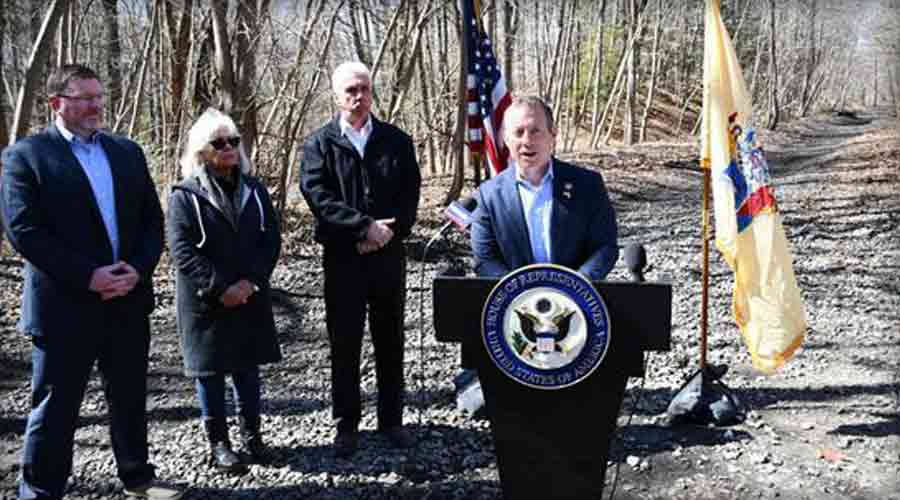 Gottheimer, who visited the site of the future park-and-ride station in Andover, said the following steps must be taken to advance the project:
• NJ Transit must fix a necessary railway culvert that Andover Township has offered to purchase the land to access. Once the agency fixes the culvert, other work to restore the Lackawanna Cut-off can move forward. This work is fully funded in NJ Transit’s current capital plan;
• NJ Transit must move forward without delay and award a bid for the historic Roseville Tunnel restoration — a critical portion of Phase I of the cut-off project to expand railways in North Jersey. This work is fully funded in NJ Transit’s current capital plan and can draw on the federal Infrastructure Investment and Jobs Act (IIJA);
• NJ Transit and Amtrak must complete Phase I of the project connecting Port Morris Junction to Andover, allowing trains to run through to New York Penn Station and Hoboken Terminal — key hubs for North Jersey commuters. The work is also funded in NJ Transit’s current capital plan; and
• Allocated resources and investment from the Bipartisan Infrastructure Bill should be used. Amtrak’s Vision for Improving Transportation Across America, which was released last year, lists train service to Scranton from New York City as a key priority for the historic funding Amtrak received from the IIJA.

"One of the major reasons I fought for rail and transit resources in the [IIJA] … was that it would help invest in the Lakawanna Cut-off railway. Now, it’s up to NJ Transit to stop playing bureaucratic games, unleash the resources we’ve allocated, and get this project moving," Gottheimer said in a press release.