M-1 Rail and Quicken Loans late last week announced that QLINE has been selected as the official name of Detroit's streetcar line. 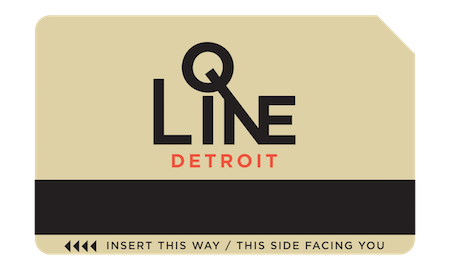 A mockup of a ticket for QLINE
Source: Quicken Loans

The two organizations also unveiled the QLINE logo, which features a stylized "Q" that "symbolizes the connectivity accomplished through the rail line," M-1 Rail official said in a press release.

In May 2015, Detroit-based Quicken Loans received naming rights as a result of its financial support during the project's fundraising period. In addition, the company is one of 20 station sponsors along the route.

"The launch of this modern streetcar marks a monumental moment in the development of Detroit in the 21st Century," said Quicken Loans President and Chief Marketing Officer Jay Farner. "Quicken Loans is proud to play our part in the beginning stages of modernizing the transit system in our burgeoning urban core."

The 3.3-mile route will run from Congress Street in downtown Detroit to West Grand Boulevard. Construction began in 2014 and is slated for completion by the end of this year.

The first modern streetcar vehicle is expected to be delivered during the fourth quarter. Each car will travel up to 35 mph.