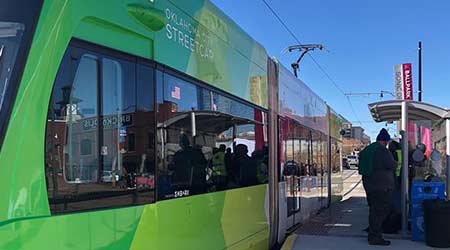 Oklahoma City on Dec. 13 became the latest city to launch a new streetcar service, bringing public transit back to the city's streets for the first time in generations.

"Our streetcar will be an important economic development tool for our entire city, accommodating visitors and residents alike," said Mayor David Holt in a press release. "It will encourage walkability downtown, answer the question of how residents and visitors will circulate downtown once they arrive, and will inspire private investment all along the route."

The OKC Streetcar has two route options —  a 2-mile Bricktown Loop and the 4.8-mile Downtown Loop — and connect the city’s Midtown, Business District and Bricktown areas.

The streetcar already has attracted $1.6 billion in investment since the route was finalized, Holt said. "And we have every reason to believe that more will follow" now that the service is open.

Streetcar rides will be free through Jan. 5, 2019, city officials said.

To learn more about the Oklahoma City and other cities that have new streetcar systems in the works, read this feature in the September issue of Progressive Railroading.