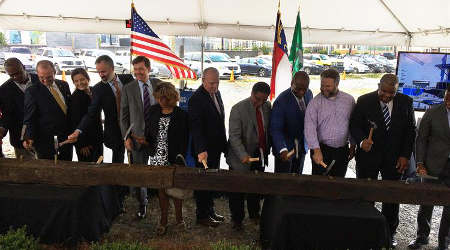 The project's first phase will include construction of 2,000 feet of track, signals, five new bridges and a rail platform, North Carolina Department of Transportation (NCDOT) officials said in a press release.

When completed, the station would provide intercity passenger-rail service to Charlotte for the first time in several decades.

Crowder Construction Co. has been awarded the contract for the first phase of construction, which is expected to be completed by 2022.

NCDOT, city officials and other local stakeholders are seeking a private partner for the development of the full station district.

"Collaboration is at the center of this project," said Charlotte Mayor Vi Lyles.

A formal request for proposals process is expected to begin later this summer. A private partner could be selected as early as December, according to NCDOT.