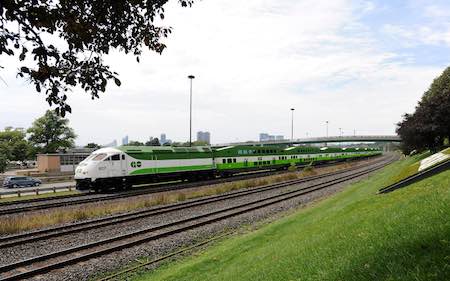 Next month, Metrolinx will add two GO Transit train trips along the Milton line and begin increasing parking spaces at one of its rail stations.

One new trip will be added each weekday morning, while the other will be added on weeknights, according to a press release issued by the Ontario Ministry of Transportation.

The line runs between Toronto's Union Station and Milton, Ont., with stops in Mississauga, Ont.

In addition, construction will begin to add more than 250 parking spaces at the Streetsville GO station in Mississauga, Ont. The station will have more than 1,700 spaces after the new ones are added.

Construction is expected to be completed in early 2018.

"By adding more GO train trips and new parking spots, we are making it easier for commuters in Mississauga to access the GO network and get to where they need to go," said Ontario's Minister of Transportation Steven Del Duca.

Meanwhile, Ontario officials yesterday announced that tunneling has been completed on the 6.2-mile underground section of the Eglinton Crosstown light-rail line.

The two tunnel boring machines working on the eastern portion of the tunnel yesterday arrived at Yonge Street having traveled from Brentcliffe Road. In total, the machines installed more than 26,000 precast concrete tunnel segments.

The machines working on the western segment of the tunnels reached Yonge Street in May.

The nearly $5.3 billion, 12-mile Crosstown route will run along Toronto's Eglinton Avenue between the Kennedy Station and the Mount Dennis intermodal terminal, which is under construction.