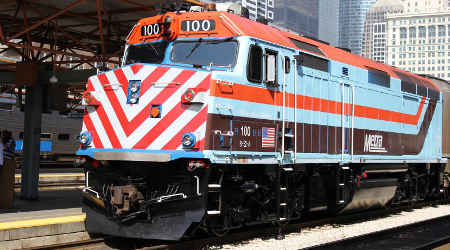 The Chicago Regional Transportation Authority (RTA) began taking delivery of its first set of F40PH locomotives in 1977. The agency started off with 28 of those units and eventually grew the fleet to 118. EMD developed the model and produced more than 500 of the units for the North American market.

The locomotive wrap was funded through private donors and a contribution from Progress Rail Corp., according to a Metra press release.

"The fact that this locomotive and its contemporaries continue to perform the same service for which they were built four decades ago is a testament to those who designed, constructed, operate and maintain them," said Bruce Nelson with the Shore Line Interurban Historical Society, which raised the funds to pay for the wrap.

Most of Metra's F40PH fleet have been rehabbed at the railroad's 47th Street shop. In 2008, 50 units underwent a more extensive overhaul by Progress Rail Services at its plant in Mayfield, Kentucky, where the locomotives were rebuilt.

In 2015, a second overhaul of F40PH and F40PHM models started at Progress Rail's plant in Patterson, Georgia.

Meanwhile, Metra and CN tomorrow will kick off a track replacement project on the Rock Island Line. CN workers will replace the track at a junction where the two railroads cross each other just south of Metra's 16th Street Tower in Chicago. Metra forces will replace the drainage underneath this section.

Four diamonds will be replaced Saturday night into Sunday morning. The work will be completed during overnight hours to minimize disruption to passenger service, Metra officials said.