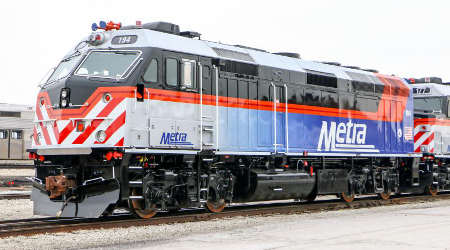 Metra and an economic development corporation have agreed to work together on testing and sharing the costs of a new "reverse commute" service to Lake County, Illinois.

Discussions between the Chicago-based commuter railroad and Lake County Partners began in April, when the private-sector group asked Metra to explore improving reverse-commute service to help Lake County employers recruit and retain employees living in Chicago, which is in Cook County.

Lake County Partners also maintains that improved train service between the city and Lake County would reduce pollution and roadway congestion, as well as improve employee productivity and satisfaction, Metra officials said in a press release.

"At a time when Metra is pinched for operating and capital funding, this partnership is an innovative way to test the demand for service to Lake County and potentially improve our infrastructure," said Metra Chief Executive Officer and Executive Director Jim Derwinski. "We are hopeful that this initiative will build our ridership, help local businesses to recruit top talent and have a positive impact on economic activity in Lake County."

Metra's current schedule is not ideal for reverse-commute riders to and from Lake Forest, the station closest to several major employers including AbbVie and Horizon Pharma. There are no morning outbound express trains, and the afternoon trains are either too early or too late for most workers.

If approved by Metra's board, the public-private partnership would give employers in the county "even greater access to workforce talent," said Lake County Partners President and CEO Kevin Considine.

Changes to Metra's schedule weren't possible until recently, when the railroad upgraded the signal system on the line, Metra officials said.