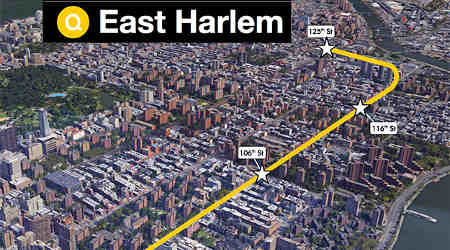 The Federal Transit Administration (FTA) has issued a finding of no significant impact for the $1.7 billion second phase of the Metropolitan Transportation Authority's (MTA) Second Avenue Subway project.

The FTA issued the finding following an extensive update of an original environmental impact statement prepared in 2004. The finding means that changes to the project's design since that time were found to have no additional adverse impact on the environment in the construction area, MTA officials said in a press release.

The Second Avenue Subway project's next phase calls for extending the Q train line from its current terminus at the 96th Street Station on Manhattan's Upper East Side to East Harlem. At its new terminus, the line will connect with 4, 5 and 6 line trains, as well as MTA Metro-North Railroad.

The FTA's finding marks an "important milestone that puts us a step closer to providing a long-overdue subway to serve the people of East Harlem," said MTA Chief Development Officer Janno Lieber.

"With the environmental approval in place, we can move into a new phase in the effort to secure federal funding for this important project," Lieber said. "It's urgent to build Second Avenue Subway Phase 2 so East Harlem can begin to receive the same benefits Phase 1 has delivered for the Upper East Side."