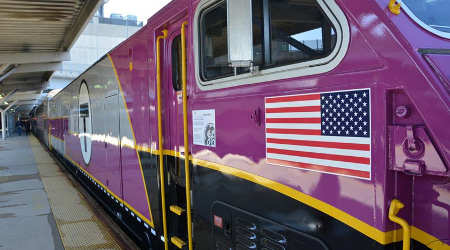 The Massachusetts Bay Transportation Authority (MBTA) today will issue a request for proposals (RFP) to study current and future commuter-rail needs as part of the agency's "commuter-rail vision."

The study will examine topics that include the type of fleet needed to optimize the existing network and deliver new service, system upgrades and locations for future stations.

With the majority of trips taken during rush hours, the MBTA's existing commuter-rail service limits the potential to increase ridership, agency officials said in a press release.

In some cases, infrastructure issues are a barrier to transit expansion, according to the agency.

"Now is the appropriate time to think about the future needs of people in terms of our commuter-rail system," said Massachusetts Transportation Secretary Stephanie Pollack. "Commuter rail is going to play a more important role than ever before in the years ahead as people seek to reduce their carbon footprint, look for more efficient travel options, and strive for more life-work balance by putting the time spent commuting to good use in either relaxing or finishing up with office responsibilities."

The MBTA and its Fiscal and Management Control Board will look at housing, real estate and other economic factors that will have an impact on commuter-rail demands, Pollack added.

MBTA officials hope to come up with a strategy that uses existing resources, addresses infrastructure needs and considers the impact of new technology on transit options.

The commuter-rail system provides 122,000 passenger trips on an average weekday.