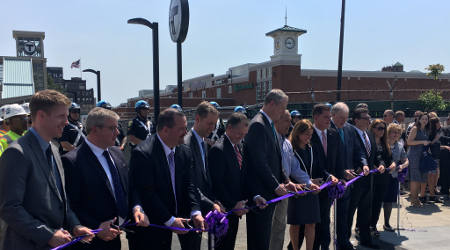 Footwear manufacturer New Balance financed the station's construction and will continue to pay for all maintenance costs over the next 10 years, Massachusetts Bay Transportation Authority (MBTA) officials said in a press release.

The stop is next to the company's world headquarters.

Located on the MBTA's Framingham-Worcester Line, the new station will open for passengers May 22. The MBTA in May 2015 broke ground on the project.

The station's completion comes as part of the 2.15-million-square-foot Boston Landing Development site, which at full buildout will include new office, retail and residential space. The commuter-rail stop features a canopied single platform, escalators and elevators.

The station will restore commuter-rail service to Boston's Allston-Brighton neighborhood for the first time since the 1960s. The stop will be served by six morning peak-hour trains and another six afternoon rush-hour trains.

"Through this public-private partnership and the use of pre-existing rail infrastructure, we're able to provide a new transit option that makes it easier than ever for people to travel to and from downtown Boston," said MBTA Acting General Manager Brian Shortsleeve.