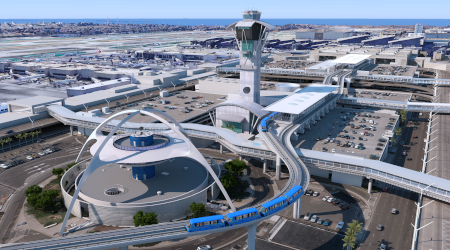 The $4.9 billion contract with LAX Integrated Express Solutions (LINXS) includes the design, build, finance and operation of trains over the next 30 years. Once completed, the trains will arrive every two minutes, have wide doors for easy access, large windows, and hand holds and seats, according to a press release from Garcetti’s office.

The six station platforms along the 2.25-mile guideway will be “open air” and have escalators, elevators and moving walkways. The project is slated for completion in 2023.

The LINXS joint venture is comprised of Fluor, ACS Infrastructure Development, Balfour Beatty, Bombardier Transportation, Dragados USA, Flatiron and Hochtief PPP Solutions. The team has been performing pre-construction work over the past year, according to Fluor press release.

The train is the centerpiece of a $5.5 billion Landside Access Modernization Program (LAMP) intended to provide more convenient access to LAX.

“This project, along with the other LAMP projects, is a big step toward modernizing infrastructure at Los Angeles International Airport and relieving significant surrounding surface transportation congestion,” said Winsome Lenfert, deputy associate administrator for airports at the Federal Aviation Administration (FAA).

The FAA conducted an environmental assessment for the project.