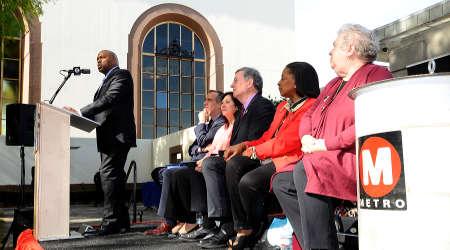 When Metro was formed in 1993, its system consisted almost entirely of buses, although the Blue and Red rail lines were operating at the time. The agency now operates four light-rail and two subway lines totaling 105 miles of rail service.

Metro and its construction partners are building four new rail lines or extensions.

"I am both astonished and proud of the numerous accomplishments this agency has achieved over the years in bringing new multimodal transportation improvements to L.A. County," said Metro board member John Fasana in a press release.

Since its formation, Metro has had seven chief executive officers. Phil Washington serves as the agency's current CEO. He joined Metro in March 2015 after serving as general manager and CEO of the Regional Transportation District of Denver.