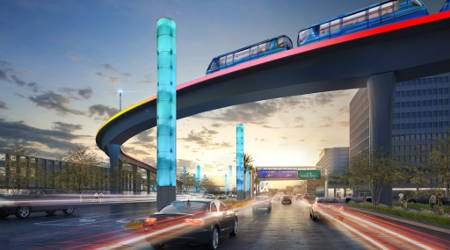 The agreement marks the largest contract ever awarded in the city's history, according to a press release issued by Los Angeles World Airports (LAWA).

The new people mover trains, which will feature wide doors for easier access with luggage, will arrive at stations every two minutes. The open-air station platforms will include escalators, elevators and moving walkways.

The 2.25-mile guideway will include stops at LAX's central terminal, a car rental facility and a station on the Los Angeles County Metropolitan Transportation Authority's Crenshaw Line, the Los Angeles Times reported.

The APM system will be built under a public-private partnership contract model. LINXS will design and construct the system, and be responsible for operating and maintaining the train and stations for 30 years. The arrangement was designed to give the team incentives to build operating systems to last, LAWA officials said.

"This historic investment will ensure that LAX is seamlessly connected with communities across the region," said Los Angeles Mayor Eric Garcetti.