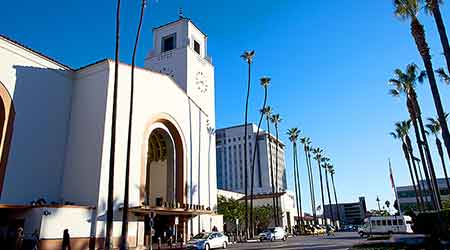 The Los Angeles County Metropolitan Transportation Authority (Metro) plans to hold events May 3 and 4 to mark the 80th anniversary of LA Union Station.

The largest train terminal in the western U.S. — which cost $11 million to build — opened on May 3, 1939. The station was designed by father and son architectural team John and Donald Parkinson with a blend of Spanish colonial, mission revival and art deco elements, LA Metro officials said in an event announcement.

Union Station is accessible on LA Metro's Red, Purple and Gold lines, as well as via Metrolink, Amtrak, and several Metro and municipal bus lines.

The authority plans to kick off the two-day community celebration with an opening ceremony in the station's breezeway area.

"The 80th anniversary will allow Angelinos to discover and rediscover the beauty and history of this beloved downtown landmark," LA Metro officials said.