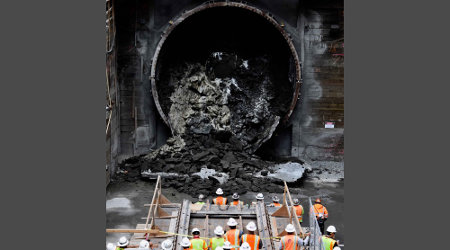 The event marked a "construction milestone" for the agency's Regional Connector project, Metro officials said in a press release. That project is a 1.9-mile underground rail route that will allow passengers to transfer between Blue, Expo, Red and Purple lines.

"The dream of connecting the Metro Rail system to the entire region is now becoming a reality with Angeli poised to continue her mission of completing the tunneling to 4th Street and Flower in a few months,” said Metro Chair John Fasana. “[This] milestone speaks volumes in completing this important work."

The boring machine will be repositioned inside the station box area to continue tunneling the remainder of the first tunnel. After that, Angeli will be taken apart and transported back to the 1st and Central Station site in Little Tokyo, where it will be reassembled to begin mining the second tunnel.

The Regional Connector line is expected to serve 88,000 riders daily and save commuters about up to 20 minutes by reducing the need to transfer when traveling to and through downtown Los Angeles.

Construction is slated to be competed in 2021.

Metro has contracted with a Skanska-Traylor Brothers Inc. joint venture to design and build the project. The joint venture is known as Regional Connector Constructors.