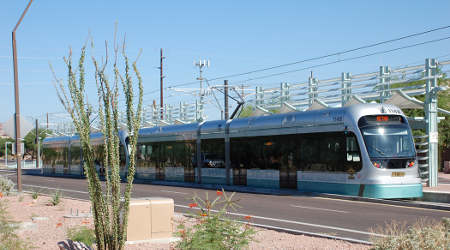 Valley Metro's Rail Board has approved Kiewit as the construction manager at-risk for the South Central, the agency's next light-rail extension.

Kiewit will partner with Valley Metro, the city of Phoenix, project designer AECOM, station artists and local community to build the extension, Valley Metro officials said in a press release.

The Kiewit contract is for an amount not to exceed $2.4 million, said an agency spokeswoman.

Construction on the South Central Extension is expected to begin in 2019. The extension will connect downtown Phoenix to Baseline Road.

In January 2016, the Phoenix City Council approved accelerating segments of the future high-capacity/light-rail transit system to advance into the Regional Transportation plan, which includes South Central. By accelerating the plan, the extension will open in 2023 rather than in 2034, agency officials said.

The advancement is funded through Transportation 2050, a 35-year, multimodal transportation plan that Phoenix voters approved in August 2015.