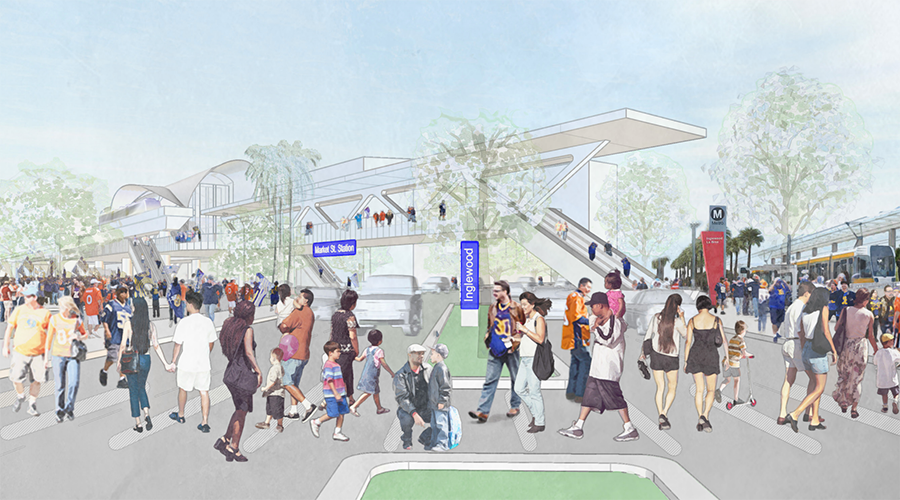 The DEIR identifies three "significant and unavoidable" impacts to the environment, including to air quality during construction, aesthetics and historic resources, Inglewood officials said in a press release.

City officials are soliciting public review and comment of the document through Feb. 8, 2021. A virtual public meeting will be held Jan. 13, 2021.

Upon completion, the $1 billion project — which includes construction of three stations and an automated people-mover (APM) transit line — would close the last-mile gap and connect passengers between the Los Angeles County Metropolitan Transit Authority's (LA Metro) Crenshaw/LAX Line and downtown Inglewood to major event centers, including The Forum; the L.A. Sports and Entertainment District, which includes SoFi Stadium; and the Inglewood Basketball and Entertainment Center.

Once operational, the project's elevated guideway would have dual tracks to allow APM trains to travel continuously in both directions to allow for greater ridership capacity, city officials said. Ridership is projected to be 3,098 daily passengers on nonevent days and 25,056 daily passengers on National Football League game days.

Moreover, the ITC project is expected to provide a critical transportation connection during the 2028 Summer Olympic Games, as the SoFi Stadium is slated to host the opening and closing ceremonies, city officials said.

The project area is bounded by the Crenshaw/LAX Line to the north, Century Boulevard to the south; the SoFi Stadium and The Forum to the east; and La Brea Avenue to the west. Its design will be compatible with the existing urban setting in downtown Inglewood and new developments on Prairie Avenue.