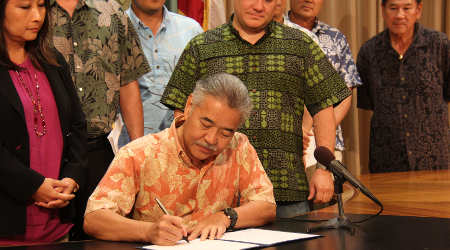 Hawaii Gov. David Ige on Tuesday signed a bill that extends through 2030 a tax surcharge to pay for the Honolulu Authority for Rapid Transportation's (HART) planned passenger-rail system.

The law extends Oahu's general excise tax surcharge three additional years and increases the state's hotel room tax by 1 percent for the next 13 years, according to a press release issued by Ige's office.

"This is a strategic investment in Hawaii's future. We must move this forward and complete this project," Ige said.

The taxes are expected to generate $2.4 billion in funding for Honolulu's transit-rail system, the Honolulu Star-Advertiser reported. Building the 20-mile network is estimated to cost more than $6.7 billion.

The Federal Transit Administration (FTA) is providing $1.55 billion for construction costs, according to HART's website.

"My administration continues to work closely with our federal, state and city partners on implementing all of the mandates of the rail funding bill, in particular more state oversight of rail construction and the timely transfer of tax revenues to the city," Caldwell said.