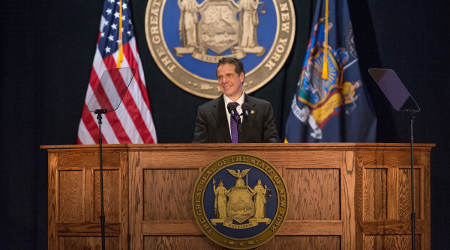 The line would run through an underwater tunnel to a new station in Red Hook, according to a press release issued by Cuomo's office.

The governor made the request as part of his "2018 State of the State" proposals.

He also asked the Port Authority of New York and New Jersey (PANYNJ) to study relocating maritime operations at the Red Hook Container Terminal to the South Brooklyn Marine Terminal in Sunset Park, Brooklyn. That change would be aimed at consolidating and improving maritime shipping activities in South Brooklyn, as well as freeing up the PANYNJ's Red Hook land for other community uses.

After both studies are completed, a community-based planning process would help recommend the appropriate redevelopment alternatives for any PANYNJ land no longer needed for maritime activities, according Cuomo's release.