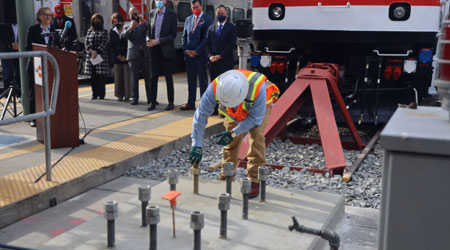 Caltrain and contractor Balfour Beatty last week marked the laying of the final foundation for the Caltrain electrification project, which will electrify the commuter-rail corridor between San Francisco and San Jose, California.

Balfour Beatty has laid 3,092 foundations for the project, the last of which was at the San Francisco station at 4th and King streets, the northernmost station on the corridor. The milestone marks the end of a “highly complex” phase of the project’s construction due to unknown underground conditions related to the corridor’s 150-year-old right-of-way, Caltrain and Balfour Beatty officials said in a joint press release. Utilities were rerouted to pave an easier path for future groundwork.

"This final foundation marks a turning point in the electrification of this railroad, toward a modern, efficient service that the people of the Bay Area deserve," said Bouchard.