FTA to reimburse LA Metro for some Purple Line work 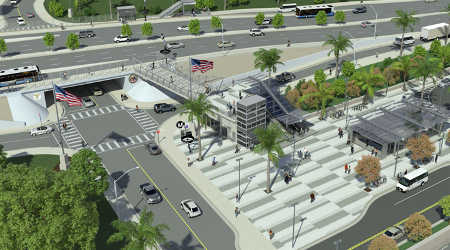 The FTA's "letter of no prejudice" permits Metro to incur costs on the project using non-federal resources, with the understanding that the costs incurred after the letter's approval may be reimbursable if the project is chosen for federal funding later.

The FTA's approval also clears the way for Metro to take advantage of "highly competitive" tunnel contract bids, which have come in lower than expected, agency officials said. The bids would trim the project's cost by about $130 million, they added.

Additionally, the FTA's nod eliminates the need to rebid the tunnel contract, which is expected to save an additional $200 million in project escalation costs and avoid nearly two years of project delays, according to the agency.

In total, the revised letter of no prejudice reduces Metro's request from $786 million for early work activities to $492 million based on favorable tunneling contract bids and "other project efficiencies," agency officials said.

The entire cost of the Purple Line's three sections is estimated at $8.2 billion, according to Metro's website.

The Purple Line extension's first two sections are under construction between Wilshire/Western and Century City. When all three sections are completed, the subway extension will run 9 miles underground between LA's Koreatown and Westwood.

Major construction on the first section between Koreatown and Beverly Hills began in 2015. The agency broke ground on the second phase in February.