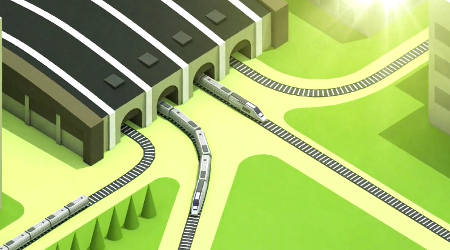 The Federal Railroad Administration (FRA) yesterday released a record of decision for the NEC FUTURE project, which is aimed at improving reliability and capacity for passenger-rail service along the Northeast Corridor (NEC) through 2040 and beyond.

The document marks the completion of the Tier 1 environmental review process under the National Environmental Policy Act, and establishes a long-term strategy for the NEC.

The NEC FUTURE record of decision expedites the environmental review process by focusing Tier 2 environmental planning work and future analysis on priority issues, according to a press release issued by the U.S. Department of Transportation.

In addition, the record of decision allows priority projects to move forward more quickly since the Tier 1 environmental review process has been completed.

The document lays out a host of potential ways to improve passenger-rail service, including increasing and in some cases doubling the number of regional commuter trains, improving travel times between key city centers, and adding more than 200 miles of expanded track capacity.

In addition, the FRA's record of decision stipulates that new segments should be designated for 220 mph operations, unless there are future or exceptional constraints that adjust limiting the highest practical speed.

The document doesn't include future funding recommendations for implementing the suggested improvements. Those decisions must be made by local and regional stakeholders, according to the FRA.

The NEC mainline is 457 miles long, stretching from Boston to Washington, D.C. Each weekday, about 820,000 passenger trips are registered along the corridor. Ninety-five percent of those trips take place on eight commuter railroads, with the remaining 5 percent on Amtrak.