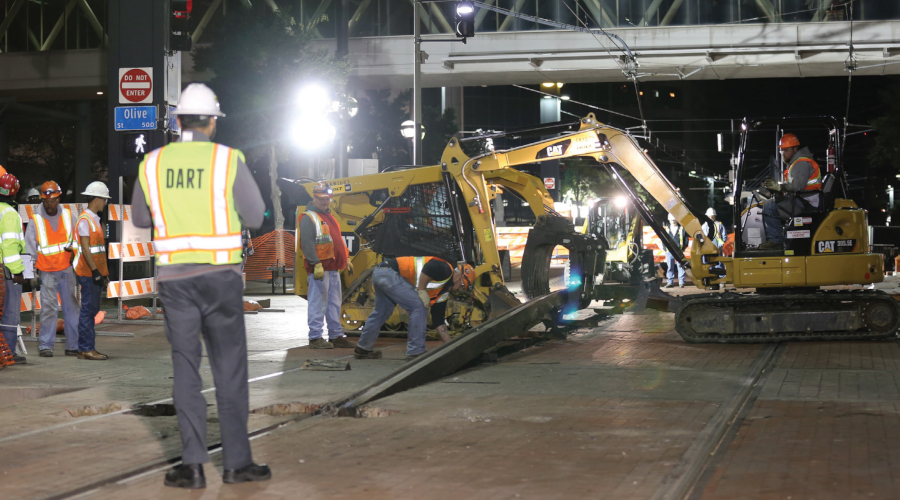 Dallas Area Rapid Transit (DART), which is pursuing $2.5 billion in rail projects, has launched the DART Plus program to communicate progress on the projects.

DART continues to replace worn light-rail track and make other track improvement through downtown Dallas. As part of this project, crews will replace an existing crossover near the West End Station and repair the underlaying road and drainage at four street intersections. The project will continue through September.

Starting in late spring, 28 light-rail station platforms on the Red and Blue lines will be lengthened to accommodate longer trains. This project, funded by grants from the Texas Department of Transportation and the Federal Transit Administration (FTA), is scheduled for completion in late 2021, with full operation of three-car trains in 2022.

Additionally, DART has awarded the contract for construction of the 26-mile Cotton Belt corridor regional rail project in North Texas to rail builder Archer Western Herzog 4.0. The agency also approved a contract with WSP/AZ&B to act as the project manager and DART's representative.

DART contractors in February began the reconstruction work needed to advance the design of the project. Design work is expected to take six to eight months, followed by utility relocation and foundation work for bridges. Completion of the new rail line is expected in December 2022.

Finally, DART is in the middle of the project development phase for the D2 Subway project, a proposed second light-rail alignment through the Dallas Central Business District.

DART also is preparing a supplemental draft environmental impact statement that integrates the subway directive and assesses the benefits, impacts and costs of the project. The draft will be available for public review and comment in late 2019.

To date, the agency has reach the 10 percent level of design on the D2 Subway project and has determined the soil types and rock depth along the route.

DART hopes to complete the project development phase and gain FTA approval to enter the next CIG phase, called engineering, in 2020, according to the DART document.