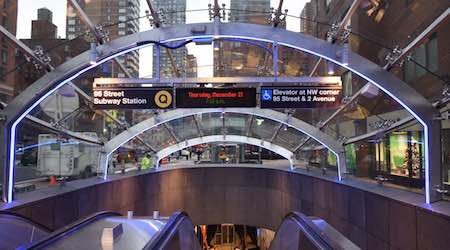 At public events held Dec. 22 and 23, Cuomo invited locals to preview the station, which features high ceilings and a column-free design, according to a press release issued by the governor's office.

Running from 96th Street to 63rd Street in Manhattan, the first phase of the Second Avenue Subway is slated to open Jan. 1.

The new 96th Street Station's features include access for people with disabilities, climate control and modern computerized signage. The station, which spans three city blocks, is based on a two-tiered mezzanine design, which is aimed at improving the flow of riders and reducing crowding.

"With unparalleled architecture and newly installed artwork along the Second Avenue line, we are transforming these stations into underground galleries that encompass the spirit and cultural charm of New York," Cuomo said.

The Second Avenue Subway's initial phase represents a "significant expansion" of New York City's subway system and was more than 50 years in the making, Cuomo said.