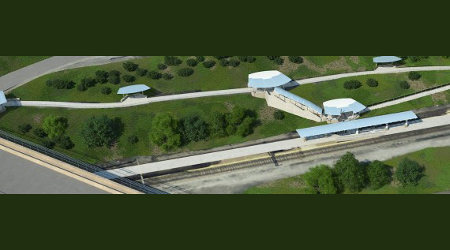 The Greater Cleveland Regional Transit Authority (GCRTA) on Wednesday broke ground on the new Campus Station, which will be served by the Red, Green and Blue rail lines.

Expected to be completed in late 2018, the rail hub is located on the site of an existing station near the Cuyahoga Community College Metro campus in downtown Cleveland.

The agency in April awarded a $6 million contract to Panzica Construction Co. to build the new station. Federal funds will cover about 80 percent of the construction costs. The total project budget is $7.5 million.

In August 2015, GCRTA's board awarded a $624,662 design contract to WSP USA. The proposed station design was presented to the board in April 2016 and finalized in January.

The new station will be compliant with the Americans with Disabilities Act. However, instead of escalators and elevators, the facility will feature an extended ramp design, GCRTA officials said in a press release.

The new station will be served by three bus routes in addition to the three rail lines.

The original station opened for light-rail service in 1930.